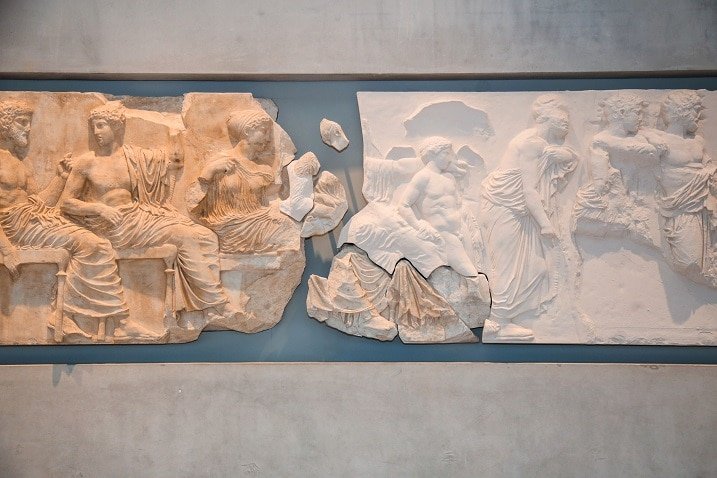 The priceless antiquity was permanently restored to its rightful place within the eastern frieze of the Parthenon following its repatriation from the Antonino Salinas Regional Archaeology Museum in Palermo, Italy on Saturday, June 4th.

The touching restoration ceremony took place at the Acropolis museum‘s Parthenon Gallery, where the Parthenon frieze is on display.

The fragment, which was formerly housed in the Antonio Salinas Museum in Palermo, was returned to Athens in January to be showcased in the Acropolis Museum for eight years.

However, in May, Italy decided to permanently return the piece—exemplifying current trends in museum studies that advocate for the repatriation of antiquities to their countries of origin.

The development comes at a time when pressure on the British Museum and the UK government to return the so-called “Elgin Marbles” to Greece has increased with public opinion and major UK media supporting the Greek claim.

Showing the “moral path” to the UK government

In attendance at Saturday’s restoration ceremony were Greek Culture and Sports Minister Lina Mendoni; the museum’s director, Nikolaos Stampolidis, and its board chairman, Dr. Dimitris Pandermalis; and a number of Italian officials.

“Today is the beginning. A beginning of historical dimensions,” Minister Mendoni commented.

“The process followed by the Government of Sicily and the Ministry of Culture of the Italian Republic for the final repatriation of the ‘Fagan fragment’ to Athens shows the clear and moral path for the return of the Parthenon Sculptures to Athens,” she stated.

“The extremely important Decision of the Intergovernmental Commission of UNESCO of September 2021, in combination with the final return and reunification of the Palermo fragment in Athens, place the moral and legal request of Greece to the Government of the United Kingdom on another basis…And this has been perceived and apprehended by everyone, even when not confessed,” the Greek Culture and Sports Minister concluded.

Italian Culture Minister, Dario Franceschini, added in his message that “Italy is at the forefront of practical confirmation of the principle of the return of cultural property, with the aim of restoring the historical cultural heritage to its places and peoples of origin.”

The repatriated fragment had come into the possession of the British consul Robert Fagan, an 18th century British Consul to Sicily under unclear circumstances.

Following his death, some time between 1818 and 1820, it was sold by his wife to the Royal Museum of the University of Palermo.

The fragment, which belongs to the eastern frieze of the Parthenon, portrays the seated gods of Olympus watching the annual Panathenaic Procession in honor of the city’s patron, the goddess Athena.

Depicted in the “Fagan fragment” are the lower legs of Artemis, the goddess of forests and hunting, whose body is depicted in a side view.

Yannis Ritsos: The Greatest Greek Poet of His Time