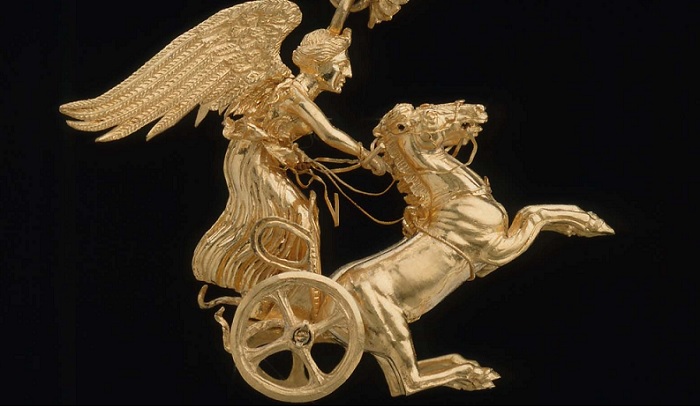 An exquisite ancient Greek earring, now housed at the Museum of Fine Arts in Boston, still dazzles its admirers fully 2,300 years after it was expertly crafted from pure gold. And it is in good company at Boston’s Museum of Fine Arts, which opened new galleries devoted to Greek art this year.

The ancient Greek earring, depicting Nike, the goddess of Victory, resplendent in gold wings and headdress and driving her two-horse chariot, still has wheels that actually still turn, more than two millennia after it was created.

The expressions on her horses’ faces are still clearly visible, and the delicate golden reins that Nike is using to control them are amazingly still extant. More than 100 individual pieces of gold were used to make the one surviving earring, which was created around the years 350-325 BC.

Boston’s Museum of Fine Arts, located on the historic city’s Huntington Avenue, houses many treasures from Ancient Greek as well as Egyptian and Mediterranean history.

Home to exhibits ranging from an architrave relief from the Temple of Athena in Assos to an oval gemstone, exquisitely faceted to reveal the goddess Kassandra, the ancient Greek and Roman art galleries house some of the most important collections of Greek objects anywhere in the United States.

Major renovations of Behrakis Wing of the MFA

The exhibit space has been totally reimagined by the Museum, with a refurbishment and rearrangement of its displays. Christine Kondoleon, the George D. and Margo Behrakis Chair for the Art of Ancient Greece and Rome; Phoebe Segal, the Mary Bryce Comstock Curator of Greek and Roman Art; and Laure Marest, the Cornelius and Emily Vermeule Assistant Curator for Greek and Roman Art, were in charge of this ambitious multiyear project.

A major renovation and reinstallation of four galleries at the heart of the Museum’s George D. and Margo Behrakis Wing for Art of the Ancient World, is now underway. The galleries will display nearly 500 objects ranging from the beginnings of Greek art (about 1,100 BC) through the fall of Constantinople in the 15th century and into the present day.

In addition to the ancient Greek earring, visitors can see a head depicting Polyphemos, the Cyclops who Odysseus and his men encounter on their way back home from Troy. When the warriors take refuge in the cave of the one-eyed Cyclops, Odysseus asks the giant to welcome them as Zeus would wish. Hear the reply of Polyphemos in Robert Fagles’s translation of The Odyssey, read by Jeremiah Kissel, in an audio recording produced by the Museum, here.

Scheduled to open in the Autumn of 2021, this project will create a grand entry for visitors to the MFA’s renowned collection of Classical art — considered to be one of the finest and most comprehensive in the world. The galleries will showcase iconic highlights of the collection, including many objects that have not been on view, adding to a renovated suite of 11 Classical galleries completed since 2009 — most recently “Daily Life in Ancient Greece.”

The renovations are made possible by a broad coalition of 24 donors, led by George D. and Margo Behrakis, The Krupp Family Foundation, Richard and Nancy Lubin and an anonymous donor.

“The MFA’s Greek, Roman and Byzantine collections are foundational to this Museum,” said Matthew Teitelbaum, Ann and Graham Gund Director. “These new galleries will bring to life the richness of Classical art, providing contemporary perspectives on the era’s profound legacy. Original interpretation will allow us to have conversations across time and geography, exploring themes that remain central to our society today, including democracy, religion, philosophy and literature.”

In these galleries, fortunate visitors will again be able to view the work of ancient Greek and Roman artists as they represented myths visually through a selection of vases, sculpture, and jewelry from the 6th century BC to the 3rd century AD.

The Museum states that the five galleries on Level 2 of the Behrakis Wing will provide visitors with a grand entry to the MFA’s renowned collection of Greek, Roman, and Byzantine art — which is one of the finest and most comprehensive in the world.

Many of the featured works are among the oldest in the collection, yet they will tell new stories, reflecting our time through the art of the past. With innovative new displays, visitors of all ages can understand the legacy of an ancient way of life and how it resonates today.

A highlight of the renovation is a new gallery dedicated to “Gods and Goddesses,” which will re-create the atmosphere of a temple. Featuring large-scale sculptures as well as more intimate objects ranging in date from the 5th century BC to the 3rd century AD, the immersive space will introduce the personalities, feats and fates of the deities the Greeks and Romans worshiped, and explore ancient religious practices.

A Byzantine gallery, the first of its kind in New England, will cover a geographically diverse collection of works ranging in origin from the era of Emperor Constantine the Great in the 4th century to the fall of Constantinople in 1453. This includes the 15th-century Monopoli altar, which will be on view for the first time after undergoing major conservation. Evocative of an altar in an early Byzantine church, the space will feature a soundscape reflecting liturgical chants.

A gallery exploring Early Greek Art — a major strength of the MFA’s collection — from its beginnings in the wake of Mycenae (about 1,100 BC) to the Persian Wars (480/479 BC) includes the Mantiklos Apollo, the most famous object in the MFA’s Greek collection.

A slideshow of some of the priceless treasures, including the magnificent ancient Greek earring, can be seen here. You can keep up to date with the progress of the reopening at the Museum’s website and sign up for their newsletters here.

In addition, there is now a free, downloadable app called MFA Mobile, available at Apple’s App Store or Google Play Store, where visitors can access information, maps, and interpretive content on their smartphones.

The app offers tours for “Monet and Boston: Lasting Impression,” which includes additional audio commentary by curator Katie Hanson, and “Cézanne: In and Out of Time.” Exhibition texts are accessible both on the app and on the gallery walls, allowing visitors to choose the way they want to experience written interpretation.

The Ocean Will Soon Have More Plastics Than Fish