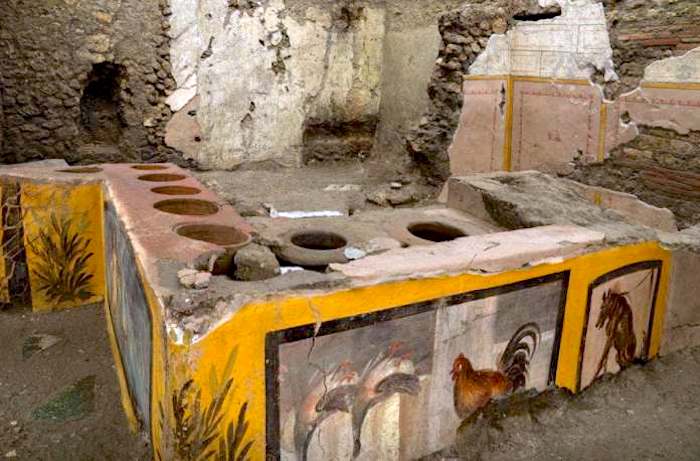 A fascinating discovery of a spectacular street food shop was made by archaeologists recently in Pompeii, southern Italy, a find with provides a peek into ancient food culture.

Experts unearthed an entire food shop that sold ready-to-eat meals to passersby, in what appears to be a proper street food shop, equivalent to our modern-day fast food.

The archaeologists found counters containing circular holes, where terracotta jars with food had been stored by the shop owner.

Additionally, these counters feature fantastically well-preserved frescoes depicting different animals, probably about the kind of meat that was sold in this shop.

Following further analysis, archaeologists found traces of beef, pork, fish, and snails, revealing the variety of dishes the residents of this Greco-Roman city were enjoying.

This find, which was made during excavations in winter of 2020, provides incredible insight into the daily lives and diets of ancient people.

The information discovered during the dig is crucial to developing our understanding of life in antiquity.

Pompeii was an ancient city located near Naples (Napoli) in the Campania region of southern Italy.

The city of more than 13,000 residents, along with Herculaneum and many villas in the surrounding area was buried under volcanic ash and pumice in the eruption of Mount Vesuvius in AD 79, leaving mankind with a spectacularly vivid archaeological site.

A Roman-era fast-food stall was unearthed in the ruins of Pompeii, with traces of food remaining in some 2,000-year-old jars https://t.co/p9wal3jotL pic.twitter.com/RimLx1FyE5

Pompeii, located in Campania, southern Italy, is an open-air museum where visitors can easily view the shockingly vivid remnants of the complete devastation of the city after the violent volcanic eruption.

Nearby Mt. Vesuvius is still an active volcano, although it is currently dormant.

The astounding fast food stand is not the only incredible discovery made at the site in recent years.

A skeleton discovered in early August in Pompeii proves that Greek culture was thriving in ancient Rome.

The discovery was made in the necropolis of Porta Sarno, an area not yet open to the public that is located in the east of Pompeii’s urban center.

A skull bearing tufts of white hair and part of an ear, as well as bones and fragments of fabric, were found in the tomb. It has been described as “one of the best-preserved skeletons ever found in the ancient city.”

An inscription on the dead man’s tomb identifies him as Marcus Venerius Secundio; incredibly, it appears to indicate that he helped stage performances of Greek plays. It says the deceased “gave Greek and Latin ludi,” or performances.

“It is the first clear evidence of performances at Pompeii in the Greek language,” Gabriel Zuchtriegel, director of the Archaeological Park of Pompeii, said in a recent statement. “That performances in Greek were organized is evidence of the lively and open cultural climate which characterized ancient Pompeii.”

Biden Voices Concern over Russian Missiles in Meeting with Erdogan