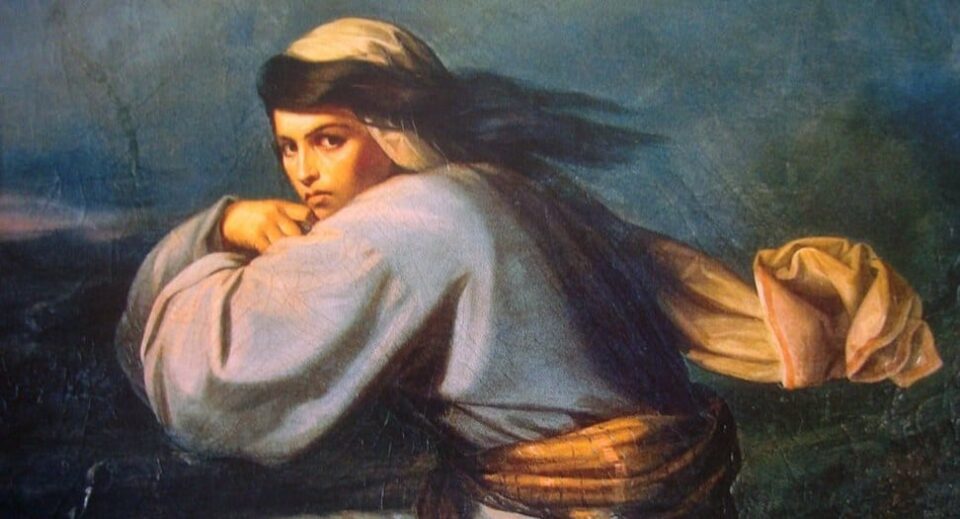 The artist Eleni Boukoura-Altamoura is widely known as the first great female Greek painter —although there were likely many talented Greek women artists throughout history who were not recognized.

The artist was born into an aristocratic Arvanite family on the Greek island of Spetses in 1821. Her father, Yannis Boukouras, was a well-known benefactor of the arts and was famous for opening one of the first theaters in Athens following the end of the Greek War of Independence.

Growing up in an artistic and creative environment, Boukoura-Altamoura’s interest in painting was fostered from a young age. Her father even hired the Italian painter Rafaello Ceccoli as a tutor for his daughter.

The Greek woman artist in Italy

At the age of 27, the Greek artist decided to travel to Naples to begin training as a painter. In order to study art, however, Boukoura-Altamoura had to dress as a man since women were not accepted as students at the time.

The painter spent many years in Italy, where she met the painter Francesco Saverio Altamoura with whom she began a romantic relationship. The couple had three children together before Boukoura-Altamoura converted to Roman Catholicism and the two were married.

The Greek painter then returned to Greece with two of her children while her youngest son remained with Francesco, and she began teaching painting and giving art lessons in Athens.

Tragically, Boukoura-Altamoura’s daughter, Sophia, contracted tuberculosis at the age of eighteen, just a short while after the family moved to Spetses to live in the Greek painter’s family home. Sophia died after just a few short months.

After her daughter’s death, the Greek painter moved back to Athens.

Ioannis Altamouras, Boukoura-Altamoura’s son, was an accomplished painter in his own right. In 1876, he returned to Athens from Copenhagen, where he had been studying.

Just like his sister before him, Ioannis contracted tuberculosis in 1878 and died shortly after falling ill from the disease.

The deaths of her children were simply too much to bear for the sensitive woman. Boukoura-Altamoura, filled with despair, burned some of her son’s and her own paintings after his death. She became a recluse and moved from Athens to Spetses at some point, where she died in 1900.

While her surviving paintings show Boukoura-Altamoura’s impressive talent, had she not burned many of her works, she would likely be much more well-known in Greece and abroad.

Her tragic life story inspired the book Eleni or Nobody, by Rhea Galanaki, which was later made into a play.

Athens Airport the Best in Europe According to User Ratings

Greek, Turkish, Israeli Diplomats Get Together to Mark Hanukkah