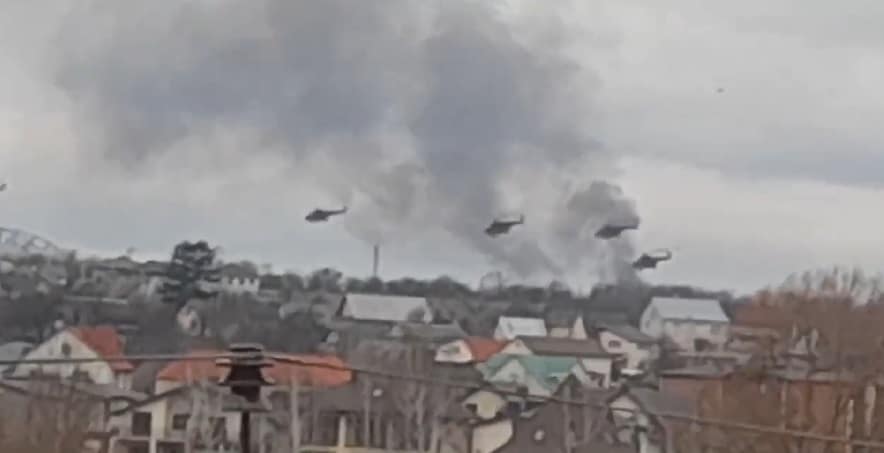 Russia launched a massive air assault on the Antonov International Airport in Hostomel, just outside the capital city of Kyiv, Ukraine on Thursday at noon.

Numerous Russian military helicopters over Hostomel town in the Kyiv Oblast. Looks like a Russian Air Assault has started. pic.twitter.com/8hwDaMZ4uD

Russia launched a full-scale invasion of Ukraine early on Thursday, starting a war with the European nation. Vladimir Putin announced the military operation into Ukraine at 5:55 am Moscow time – and minutes later the first shelling and missiles were launched into Ukraine.

The woman who only gave her first name of Nikki, appealed for help through Greek Reporter, saying that “is really scared.”

“I want to live, I want peace,” she says. “They tell us not to panic and be calm but it’s very difficult. We do not know what will happen from one minute to the next,” Nikki says.

Russia’s attack on Ukraine Thursday ranked among the “darkest hours for Europe” in nearly 80 years, according to the European Union’s foreign policy chief.

“These are among the darkest hours for Europe since the end of World War II,” EU High Representative Josep Borrell told reporters.

Borrell promised “urgent assistance to Ukraine,” as well as supporting evacuation efforts, including of EU staff.

EU sanctions are in the pipeline as well. Speaking alongside EU Commission President Ursula von der Leyen, Borrell said punitive measures from the 27-member bloc against Russia would be “the harshest packet of sanctions that has ever been implemented.”

Palestinian Equestrians Trip to Crete Could Serve As Alt-Tourism Model

Stranded Whale On Beach Near Athens Unlikely to Recover