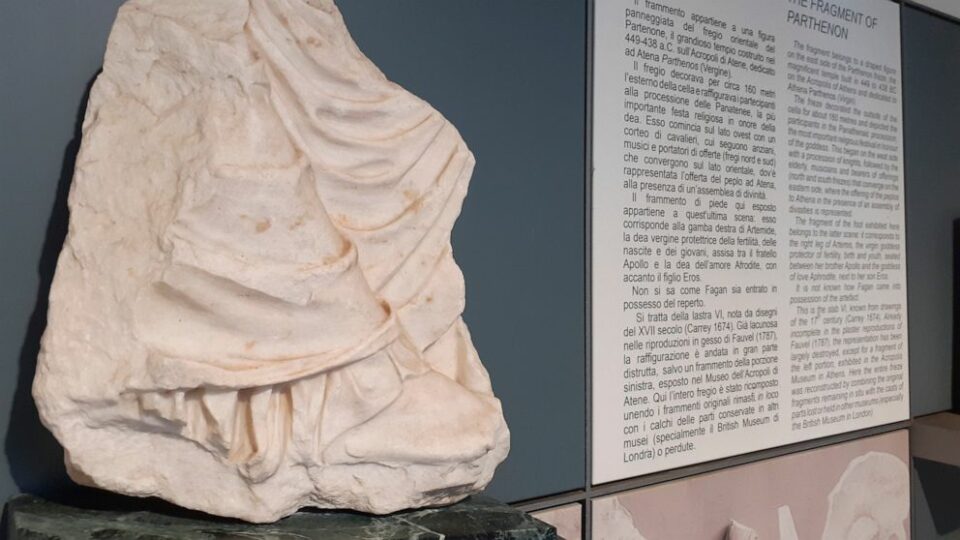 The fragment from the east Parthenon frieze depicts the foot of goddess Artemis peeking through a tunic.

The particular frieze from the beast side of the Parthenon depicts the gods of Olympus sitting while observing the annual Panathenaic Procession in honor of the city’s patron, Athena.

The fragment used to belong to the collection of Robert Fagan (1761-1816), a painter, diplomat and archaeologist who had served as British Consul of Sicily and Malta. It will be exhibited at the Acropolis Museum for eight years as of Monday.

In exchange for the “Fagan fragment”, the Acropolis Museum will send to the Antonino Salinas Museum Athena’s headless statue from the 5th century BC and an amphora from the 8th century BC.

Will the British Museum do the same?

While the Antonino Salinas Museum did right by sending the “Fagan fragment” to be exhibited next to its marble siblings, it remains to be seen whether the British Museum does the same.

In statements to the British newspaper “The Telegraph”, Greek Prime Minister Kyriakos Mitsotakis said that “the dynamics that are being built”, step by step, will lead to the repatriation of the Parthenon Sculptures.

“The debate has reached a delicate juncture,” he said, referring to the aftermath of his November 16 meeting with UK Prime Minister, Boris Johnson.

“My feeling is that a dynamic is really being built and, of course, the ‘elephant in the room’ is the discussion we should have with the British Museum,” Mitsotakis said.

The Greek premier also noted that his visit to Downing Street and the publicity it received helped to create “a great wave of international support” for this purpose, given that public opinion in Britain also supports the request for the return of the sculptures.

“This is an important fragment, a part of the frieze that represents the gods which was in Sicily for about two centuries”, Mitsotakis noted.

The fragment likely to remain in Greece indefinitely

Mitsotakis stressed that the return of the “Fagan fragment” from Italy is an “important step” and stressed that “it is not to be repaid as a loan but as a deposit for eight years with the prospect of remaining in the country (Greece) indefinitely.”

Upon announcing the agreement, Greek Minister of Culture, Lina Mendoni explained the importance of the “Fagan fragment” return.

The minister said that the piece is not a long-term loan (deposito) for exhibition, but with the prospect of remaining on a permanent basis (sine die) in the Acropolis Museum, reunited forever with the Parthenon frieze.

“The intention and aspiration of the Sicilian government to permanently repatriate the Palermo section to Athens, confirms the long-standing ties of cultural connection and brotherhood of the two regions,” Mendoni said.

Greece Second in the World in Number of Blue Flag Beaches

Hundreds of Motorists Trapped in Athens Ring Road Due to Snow