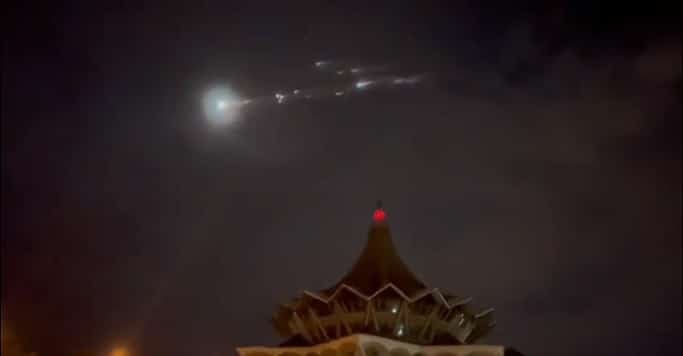 The remnants of the Chinese space rocket, which was feared could fall in inhabited areas, were seen burning in the night sky as they re-entered the Earth’s atmosphere and fell in the Indian ocean on July 31st, sparking new criticism for China’s handling of space debris.

The European Union Aviation Safety Agency (EASA) had issued a warning on July 28th that the falling rocket debris could end up crashing into Greece, Bulgaria, France, Italy, Malta, Portugal, or Spain. A more accurate prediction of the trajectory of debris, however, was made closer to the time of the object’s re-entry, pointing to a different ground track along the Indian ocean.

Zoom in on the reentry region. The video from Kuching implies it was high in the atmoisphere at tha time – any debris would land hundreds of km further along track, near Sibu, Bintulu or even Brunei. pic.twitter.com/qH1x67KBek

US Space Command confirmed on Twitter that “the People’s Republic of China (PRC) Long March 5B (CZ-5B) re-entered over the Indian Ocean at [approximately] 10:45 am MDT on 7/30.”

NASA Administrator Bill Nelson criticized China on Twitter for not sharing specific trajectory information as their Long March 5B rocket fell back to Earth.

“All spacefaring nations should follow established best practices, and do their part to share this type of information in advance to allow [for] reliable predictions of potential debris impact risk, especially for heavy-lift vehicles, like the Long March 5B, which carry a significant risk of loss of life and property,” he pointed out in consecutive tweets. “Doing so is critical to the responsible use of space and to ensure the safety of people here on Earth.”

This is the third time in two years that space debris from a Chinese space rocket has re-entered the Earth’s atmosphere in an uncontrolled descent.

According to astrophysicist Jonathan Mc Dowell, a similar phenomenon should be witnessed again in October 2022 with Chang Zheng 5B Y4, which is scheduled to launch the next Chinese space station module.

Cultivation of Cannabis was Legal in Greece Until 1936

Snowstorms Forecast for Greece Yet Again

Nea Hellas: The Ship That Brought Thousands of Greeks to the US