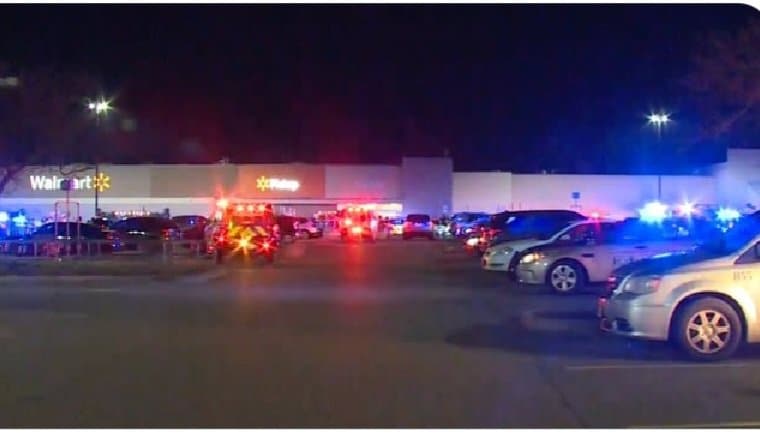 At least six people were killed and several were injured at a mass shooting at a Walmart store in Chesapeake, Virginia on Tuesday night.

A man believed, to be the store manager, opened fire then turned the gun on himself, and is now dead.

On a Facebook live stream, one employee from the Walmart store claimed it was the manager who carried out the attack, saying, “I just left out a break room, manager come in there… started shooting bro.”

Chesapeake city officials asked people to stay away from the store during the investigation. “Our first responders are well-trained and prepared to respond; please give them space to do so” the city said in a tweet.

Joetta Jeffery told CNN her mother, Betsy Umphlett, sent her texts from inside the store during the shooting, alerting her that someone had opened fire.

“I’m crying, I’m shaking,” Jeffery told CNN. “I had just talked to her about buying turkeys for Thanksgiving, then this text came in.”

Jeffery said her mother is uninjured but in shock, and they’ve been reunited.

“Shocked” at mass shooting in Virginia

Walmart said it was “shocked at this tragic event” and that it was “working closely with law enforcement”.

Virginia state Senator Louise Lucas said she was “absolutely heartbroken” at what she described as “America’s latest mass shooting”.

She added on Twitter: “I will not rest until we find the solutions to end this gun violence epidemic in our country.”

Tuesday evening’s attack comes just days after a gunman opened fire at a LGBT nightclub in the US state of Colorado, killing five people and injuring 17 others.

EU Imposes Price Cap on Russian Oil at $60 Per Barrel

Report: China Asked Russia to Delay War Until After Olympics