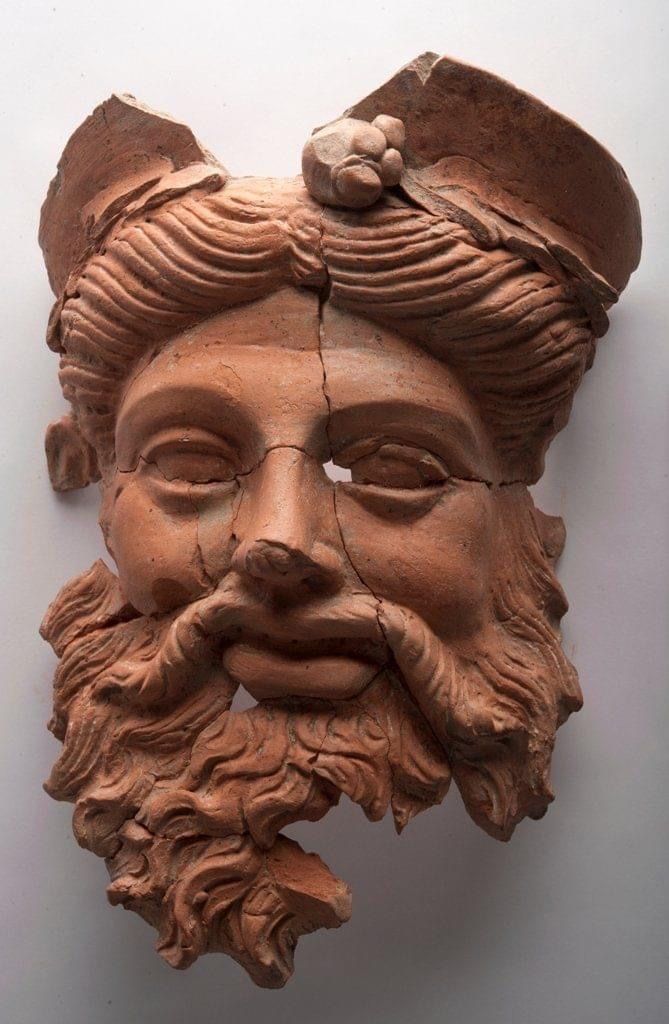 An extremely expressive terracotta mask, thought to represent the Greek god Dionysus, was recently unearthed during excavations of the ancient Greek city of Daskyleion in Western Turkey.

The newly-discovered treasure, which appears to represent a rather tipsy god, was located in the city’s acropolis, and is thought to have served as a votive offering of gratitude to Dionysus, according to archaeologists.

Widely known as the god of wine and revelry, Dionysus was also the god of theater and of ritual madness — the term “bacchanal” comes from his Latin name, “Bacchus” — and he served an important role in the development of ancient Greek theater.

In myth, Dionysus is known to free his followers from social and cultural restraints through wine or ritual, most notably in Euripides’ tragic play “The Bacchae.”

In the development of theater, it is believed that Dionysus’ freeing influence allowed actors to fully embody their roles, transforming into the characters on stage. Ancient Greek theater itself is thought to originate from early Dionysian festivals.

The Dionysia, a yearly festival honoring the god in Attica, featured ritual processions followed by theatrical competitions, including dramatic performances of plays written by the best playwrights of the day.

Works by Sophocles, Aeschylus, and Euripides were known to have been performed at the festival.

Just last year, archaeologists uncovered an ancient cellar in a kitchen at the archaeological dig of Daskyleion. Scholars hope to use their finds to study ancient cuisine and eating habits.

Surviving images on countless works of art, including pottery, frescoes, wine cups, and sculptures, frequently depict ancient Greeks reclining on one side to eat and drink at a symposium.

The habit of reclining to dine in ancient Greece began at least as early as the 7th century B.C. and was later picked up by the Romans.

Strangely, Greeks are always pictured lying on their left side — never their right.

The reason for this tradition is not entirely clear, but historians and classicists have debated the topic for decades.

The site of the ancient city of Daskyleion, which was first inhabited during the Bronze Age, was discovered in 1952. Since then, it has routinely produced important finds from many different historical periods.

Located in the ancient region of Lydia, Daskyleion received its name around 750 BC from the king Daskylos, father of Gyges, a figure found in both history and myth.

Bringing Folk Music from Rhodes into the Modern Age