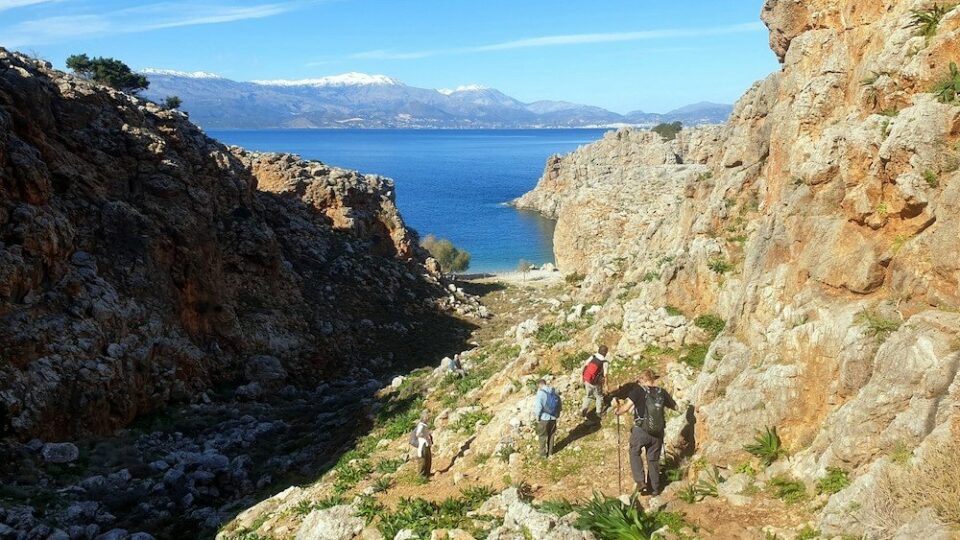 The only way to truly appreciate the beauty and majesty of the landscape of Crete is to walk through it. There are more walking routes on the island than you can count; some are well-known or signposted, and others can be found in guide books and on maps, but many are known only to the locals.

Wherever you walk in Crete, however, sooner or later you’ll come across evidence of the Bronze Age Minoans. You’ll be walking on their ancient footpaths or past the ruins of their settlements; their presence is everywhere.

Although the larger palace complexes are well known and regularly visited (Knossos, Phaistos, and Malia, for example) there are thousands of smaller Minoan settlements that few people ever get to see.

The Minoans and the landscape

It was Sir Arthur Evans who named the Bronze Age people of Crete “Minoans,” believing that at Knossos he’d found the palace of King Minos. His excavations also revealed that the site of Knossos had been occupied by earlier Neolithic people.

This is likely the case with many of the other Minoan settlements too, since the Neolithic and early Minoans were masters at using the landscape to their best advantage. They didn’t just live on the landscape, they lived in it.

More than all that, however, on this walk we visit a site where Stone-age Neolithic people smelted copper, a development that ushered in the Bronze Age and the Minoans.

The walk begins in the village of Kavousi, about 15 km (9.3 miles) south-east of Agios Nikolaos.

The first part of the walk takes us out of Kavousi and across a shallow, flat-bottomed valley. The valley’s floor consists of marine sediments from when this part of Crete was below sea level. It’s a flat, well drained and nutrient-rich area that was ideal for Neolithic and early Minoan agriculture. It’s been in agricultural use ever since — and today it’s full of lush olive groves.

After crossing the valley we walk up a concrete road that climbs the side of a limestone hill. After passing a large depression in the hill (known as Lakkos Ambeliou) with its several meters of red clay underfoot, we come to the head of a small gorge called Agriomandra Gorge.

This small but attractive gorge runs all the way from Lakkos Ambeliou down to the sea, cutting vertically down through the 80 meter (262-foot) high cliffs. The gorge was formed in the recent geological past by the overflow of water from when Lakkos Ambeliou was a shallow lake.

By Neolithic times, the lake was already dry and the red clay was used as the raw material for all sorts of pottery items. The Minoans used it too — in fact it was still being used to make roof tiles until quite recently.

Our path now takes us down the Agriomandra Gorge, all the way to a picturesque and well-sheltered cove at the bottom.

In Neolithic and Minoan times this protected cove and beach made an ideal port for loading and unloading small ships. The gorge provided an easy route up onto the cliff tops above.

The Ottoman Turks built a paved road up the gorge, traces of which can still be seen in places, so the cove and beach were still in use as a port into fairly recent times. Today it’s only visited by local fishermen – and by the occasional walking group of course!

A walk to the Minoan settlement on Crete

We follow a precipitous path up the side of the gorge and up a steep limestone hill to the remains of a Minoan settlement on the top.

As we approach the Minoan ruins the landscape changes quite abruptly and without warning. The rough and rocky maquis-covered limestone gives way suddenly to a flat, grassy landscape. There is even a dirt road here.

We have just crossed a thrust fault, where millions of years ago the limestone we have been walking on was pushed up and over metamorphic phyllite rocks, which form the flatter grass-covered landscape onto which we have just emerged.

The building of the Minoan settlement astride the thrust fault indicates that access to fresh water from the springs was one of the key reasons for building the settlement here.

Although the remains we see today are later Minoan it’s very likely that there was an earlier Neolithic settlement on the site. Its location in the landscape offers all the advantages Neolithic people could want; ready access to water, access to good agricultural land in the valley, easy access to the sea via the nearby gorge and beach, and a commanding defensive location as well.

There is another, more practical, reason for the settlement being where it is, however; copper smelting.

A short walk down the old dirt road, and just before a second thrust fault (where the phyllites have been pushed up and over Plattenkalk limestones), we pass a nondescript small headland called Chrysokamino.

Chrysokamino was most recently excavated in the late 1990’s, under the auspices of the American School of Classical Studies at Athens, the latest in a number of excavations to have been conducted at the site.

Most earlier studies identified the site as a simple copper metalworking operation and dated it to the middle or late Bronze Age. One study even suggested that it was later than the Bronze Age. All of these earlier studies agreed that Chrysokamino was fairly unremarkable and not of great significance.

The American School excavations used a more modern and systematic approach, however, and they were able to establish that it was a very early copper smelting site, the earliest example known on Crete. (Copper smelting is the process by which copper metal is extracted from crushed copper ore).

This means that Chrysokamino is much earlier than was previously thought and is of far greater significance than had been realized. It was active in the earliest days of copper smelting and was thus in operation at the very dawn of the Bronze Age.

In addition, there is no evidence of the smelted metal being worked into artifacts at this site. Chrysokamino was just an ore smelting site; the mining and crushing of the ore and the working of the copper metal produced were done elsewhere.

A couple of hundred meters past the smelting site, on the steep slopes of a limestone hill, is a well hidden cave. It’s known variously as Theriospilio, Kolonospilio or Agriospilio. I prefer the latter name, however; it means ‘wild cave’ and is particularly appropriate!

It’s a difficult scramble down a steep rocky hillside to reach the cave, and there are many loose stones and rocks underfoot. Great care is needed here because 20 meters or so beyond the cave mouth the hillside becomes a steep cliff which drops off vertically into the sea!

The entrance to the cave is tiny, and you have to scramble on your hands and knees down a muddy slope to get inside, but the interior is quite large and dry. There are numerous stalactites and stalagmites inside; some are enormous columns and must be unimaginably old. The deeper regions of the cave are a roosting area for bats, so we never venture very far into the cave to avoid disturbing them.

The proximity of the cave to the smelting site and to the settlement ruins suggests that it might have been used as a dwelling by the first Neolithic peoples to occupy the area, and possibly later as a storeroom for the smelting operation. It may even have been a convenient hiding place, a natural “panic room,” in the event that the settlement was attacked by pirates — a far from rare event in earlier times.

Completing the walk in Crete

The route up from the cave is the reverse of the scramble down. It’s not a difficult climb but it is important to take care where you put your hands and feet — this is not a place you want to be slipping and sliding. After a short but quite tiring ascent, we reach the dirt road again.

Continuing on the dirt road we soon descend into the olive groves of the flat valley and an easy and level path back into Kavousi.

I know of no other walk where so many of the geological features of Crete can be so clearly seen in such a relatively short distance. What makes this walk particularly interesting, however, is the abundant evidence of how well late Neolithic and early Minoan people understood and adapted to the landscape in which they lived.

Today we fight the landscape; we build roads, bridges and tunnels to defeat it, we live in cities on land that has been cleared and shaped to suit our needs. We no longer have the ability to appreciate how a landscape can benefit us and how we can live within the landscape instead of in spite of it.

The other aspect of this walk that is fascinating, and which always makes the hairs on the back of my neck stand up, is the copper smelting site.

Although there is nothing much to see there today, apart from some faint marks left by the American School’s archaeological excavations, it’s still a physical connection to that seismic shift in human history when the Stone Age became the Bronze Age.

Bronze is an alloy of copper with a small amount of tin of course, and I can’t help but wonder — was this earliest of copper smelting sites, perched on a windswept headland, the very birthplace of the Minoans?

Musk and Biden Feud: All of the Tesla CEO’s Fights with the US President

Wise Women: Six Ancient Female Philosophers You Should Know About

New Fire Breaks Out Near Megara, West of Athens