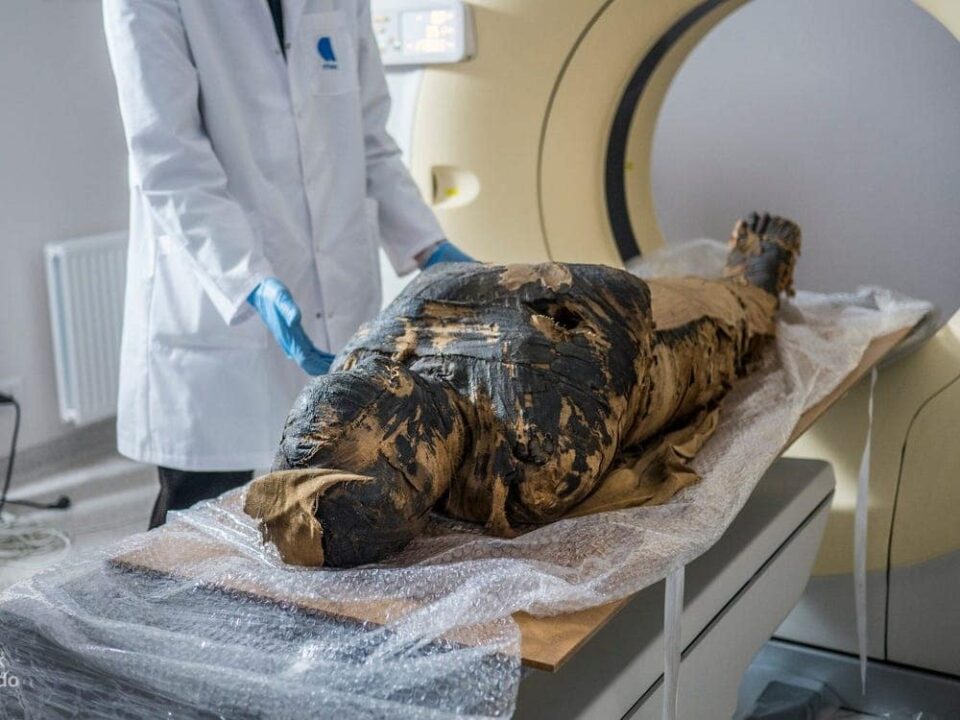 A 2000-year-old fetus was discovered in the belly of an Egyptian mummy by Polish reseachers recently, the first time in history that such a find has ever been recorded.

The Warsaw Mummy Project, headed by bio-archeologist Marzena Ożarek-Szilke from the University of Warsaw, and archaeologist Woljclech Ejsmond from the Polish Academy of Sciences, conducted the research that led to the groundbreaking discovery.

They found that the fetus itself was preserved, like its mother, as a result of being “pickled,” keeping it intact over the millennia since she died.

The mother’s body acidified after her death, according to a report in Science Alert.

The research project stated on its blog that “The foetus remained in the untouched uterus and began to, let say, ‘pickle’. It is not the most aesthetic comparison, but conveys the idea. Blood pH in corpses, including the contents of the uterus, falls significantly, becoming more acidic, and concentrations of ammonia and formic acid increase with time. The placement and filling of the body with natron significantly limited the access of air and oxygen.”

The researchers added that “the end result is an almost hermetically sealed uterus containing the fetus. The fetus was in an environment comparable to the one which preserves ancient bodies in swamps.”

The comparison here is reminiscent of the “Tollund Man,” a Danish man who researchers believe was sacrificed and whose body was placed in a swamp in Denmark. When his remains were found in the bog in 1950, his body had been so remarkably well preserved that the authorities believed he had been a recent murder victim.

Incredibly, the leather noose used to kill him was incredibly still hanging around his neck. In actuality, scientists believe the man had been killed sometime during the period of 405 to 380 BC.

The Egyptian fetus was preserved in not one but two ways, however; not only was the body mummified by acidity — which dried up after she was embalmed — but the mother’s body was also covered in natron, drying it out afterward.  This process resulted in the mineralization of both bodies.

The scientists stated that in the past, radiologists always look for bones when examining mummies — but this discovery points to the fact that in the future, “it is more important to study the shape of soft tissue in the pelvic area” since the soft bone structure of fetuses is difficult to detect radiologically during the first two trimesters.

The team stated on their blog “The change from alkaline to acidic environment led to partial decomposition of the foetal bones, especially to washing out minerals – of which there was not much anyway, because mineralisation is very weak during the first two trimesters of pregnancy and accelerates later.”

Explaining how this occurs, the researchers compared the process of “bone demineralisation in (an) acidic environment” to what would happen to an egg after being placed in acid.

“The eggshell is dissolving, leaving only the inside of the egg (albumen and yolk) and the minerals from the eggshell dissolved in the acid. A similar dissolution of bones occurs in the acidic environment of bogs. The bog bodies sometimes do not have bones because of a similar process,” they explained.

Obviously, the jaw-dropping discovery leads to speculation that a great many other female mummies were also pregnant at the time of their death, and therefore other mummified fetuses do exist in institutions around the world. This, they said, was what they considered “he most important part of their find.

Ożarek-Szilke stated “It is still difficult to draw any conclusions as we do not know if this is the only pregnant mummy. For now, it is definitely the only known pregnant Egyptian mummy.”

Referring to her as “The mysterious lady,” the scientists are still puzzled over another aspect of her embalming, in which all her other internal organs were removed except for the uterus holding the fetus.

However, they never lost sight of the humanity of hte mother and fetus, saying “Although the pregnant mummy became recently a kind of a ‘celebrity’ and from the scientific point of view the whole research is fascinating, we should not forget that we are dealing here with a human tragedy that we must respect.

“The Mysterious Lady died together with the unborn child, and by examining her, we restore their memory. We remember that it was a long-lived person who had her dreams, probably loved ones and was loved. Now she reveals to us the secrets she took with her to the grave,” the scientists concluded.

Fish Freeze to Death in Greece